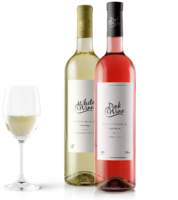 Those who have been bringing exquisite wines since 30

In 4 B.C.E. in Bethlehem was born a man about whom was spoken and written about already a lot.

After having fled to Egypt and returned to Nazareth, he grew up in a community where they got to know him as one of the children of the devout Essene family of Joseph and Myriam (Miriam/Mary).

When he became an adult and was one day at a wedding party in Cana he changed water to wine performing one of his first miracles , presenting "the beginning of his signs." (Joh 2:1-11)

After his baptism in the river Jordan he started his public life and choose himself 12 talmidim, which he gave such an education to come to continue his work when he would be gone.

After Jeshua his death and resurrection they became enlightened by the Power of God (by His Holy Spirit) and started showing others that Jeshua or Jesus Christ was the way to God.

From then onward, in the early days of the 1st century of this contemporary age, goyim also came to join their movement "The Way"  and later became known as Christians. But their movement in the 4th century had to face an incredible wrong going, the majority wanting to follow the Roman Greek philosophy of a three-headed godhead, known as the Trinity.
Though several sincere followers of Christ did not want to step in that trinitarian adventure and kept to the the faith in the Only One True God, Jehovah Who is One and not two or three.

Jeshuaists, as their name indicates, are followers of Jeshua, or people who prefer not to be part of that greater community of people who call themselves Christian, but do not follow the teachings of Christ nor adhere to the God Jesus worshiped, the God of Israel, Who is an All-knowing Eternal Spirit God Who can not be seen by man.

Jeshuaists are men and women who give preference to the words of the Bible instead following human doctrines. They do believe that God's Word is infallible and that He is no liar and as such when He Himself declared Jeshua (Jesus) to be His only begotten beloved son, believe that Jesus or Jeshua is really the son of God and not a god son or an incarnation of the Most High Who no man can see.

By our name we indicate not only to be a follower of Jeshua, but show the world that we want to bear his name in high regard in honor of what he has done for all mankind.

And like our master teacher (Jeshua or Jesus Christ) we also want to give the world the sign that there is only One True God, The God of Abraham, Who is also the God of Jesus and his disciples, Who is an All-knowing Eternal God no man can see, but Who wants the relationship with Him restored and greet all as His children. And as children of God we want to bring others also to our Abba, our Father in heaven, Who is the Mightiest above all gods, and should be the Only One True God of all.

Since the early days from this Era sincere followers of Jeshua the Christ went calling others, showing them that Jeshua is the Way to God. They told about the changing of water in wine and other miracles, but also how Jeshua was impaled as an offering of a lamb for God.

On the 14th of Nisan Jeshua had also taken a goblet of wine, telling his talmidim that was a sign of the new covenant, singed by his bloodshed for forgiveness of sins and bringing salvation for those who want to accept him.

That glass of wine we want others also come to taste. Showing to the people it is life giving wine, for a true covenant bringing peace for many.

For already 20 centuries this world knows people who come together at regular times to share the breaking of bread and drinking the wine as symbols of that bloodshed, in remembrance of the impalement, death and resurrection of Christ, Jeshua (Jesus) the Messiah.

That movement of followers of Christ, the Jeshuaists are not silenced by those who did everything to get them silenced. Even the Nazi extermination camps, in the previous century, did not succeed to silence us. Instead it made many of us stronger to go for the right faith in the Only One True God, Jehovah, and looking forward to that promised Kingdom of which the Holy Land, being restored in 1948, is only just a beginning of a new era, in which we do hope we shall be able to invite many pore to join us at the table of remembrance to lift up the glass of wine in honor for the son of God